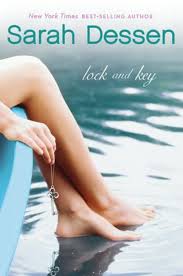 Category: Novels
Tags: Relationships, Siblings
Author: Sarah Dessen
Genre: Fiction
Title: Lock and Key
Novel: Lock and Key
This is touching story of a teenage girl, on the brink of adulthood, trying to find a family in the sister she barely knows.

Ruby has been living on her own since her mother left her. Once the social workers find out Ruby is sent forcibly to live with her sister Cora whom she hasn’t had any contact with since her sister was old enough to leave herself. Ruby is having difficulty settling into the new accommodations, even with a gorgeous house in an upscale part of town, a fancy private school, and all the new stuff she could want, she doesn’t feel at home. Ruby has yet to make friends when she meets the next door neighbor boy who happens to be very popular. After being alone for so long Ruby struggles with the idea of a real family. Ruby has a new house and in turn a new life, but will the people and places around her ever feel like home?