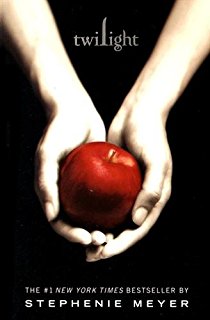 Category: Series
Tags: Friendship, Romance, Vampires
Author: Stephenie Meyer
Genre: Paranormal
Series: Twilight Saga
Title: Twilight
PARENTS: These are great books, but not for anyone under the age of ten. They have a lot of romance, depression, jealousy and hate. It is a book about vampires and fantasy characters as well.

The #1 best selling book, is great for all readers out there. (Yes, including boys.) A vampire romance is starting in this lonely town of Forks Washington. Bella just made the move from sunny Phoenix, Arizona to wet and muggy Forks Washington. She meets Edward Cullen and it’s love at first sight. Edward and his family seem to be separated from the rest of the students at the school but Bella won’t be kept away. Sometimes Edward seems to be interested in her, and other times it’s like he can’t stand to be around her. As she uncovers his true identity, she is forced between choosing between her own safety and giving into her love for him.