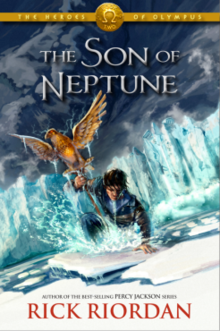 Category: Series
Tags: Camp, demi-gods, Friendship, Roman
Author: Rick Riordan
Series: Heroes of Olympus
Publisher: Disney-Hyperion
Title: The Son of Neptune
Demigod Percy Jackson, still with no memory, and his new friends from Camp Jupiter, Hazel and Frank, go on a quest to free Death, but their bigger task is to unite the Greek and Roman camps so that the Prophecy of Seven can be fulfilled.

Waking up disoriented to find monsters trying to kill you is not all that uncommon for a demi-god. When the monster you strike to kill won’t die, it becomes a nuisance that the demi-gods need to fix. Percy Jackson, still can’t remember who he is, but has found his way to the Roman demi-god camp where he will have to prove his worth to the gods again if he wants to survive.  All of his memories are absent except for the name Annabeth. Percy and his new friends must join together to find out what the gods have in store for them and defeat it to prove themselves in war.

Hazel has a past life where she made a mistake that threatens the future of humanity. Frank is descended from heroes and is supposed to have the ability to be anything he pleases; whatever that means. He doesn’t even know who his father is! These three demi-gods all have something to prove. Find out where their quest will take them in the sequel to The Lost Hero.