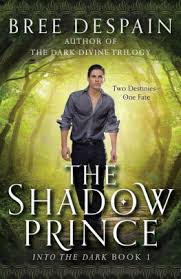 Category: Series
Tags: Friendship, High School, Music, Mythology, Teens
Author: Bree Despain
Genre: Urban Fantasy
Series: Into the Dark
Publisher: EgmontUSA
Title: The Shadow Prince
This is a modern day tale of Persephone, the queen of the underrealm. I would recommend this book for mature readers, as there is murder and alcoholism in this book.

The portal between the underrealm and the earth only opens twice a year. Only a Champion chosen by the Oracle is allowed to pass through on a quest to bring back a boon for the court’s harem. Haden Lord has been looked over twice for this honor and with his shameful past he never expected to be announced as the Champion for a very important quest. He must find the only girl that can save the courts and convince her to come to the realm with him of her own volition.  Being raised in the underrealm is completely different from the weak lives of humans but Haden must learn to tap into his human emotions if he is to build a relationship strong enough to convince this girl to go with him to the underrealm. He only has six months! Failure would mean returning home a disgrace and could mean the destruction of the life and world he knows.

Daphne lives in the small town of Ellis is Southern Utah with her Mother who owns the local flower shop. Her dream is to be a famous singer like her father, who left before she was born. She has met him a few times over the years but never expected him to show up announcing he gained full custody of her and she has to move with him to California. There she will be able to attend Olympus Hills high school, a school famous for their music program. She’s never been allowed outside of Ellis her whole life, and now she has no choice but to move to another state without her mom. Daphne can’t quite put her finger on the weird feeling she gets from the grove in Olympus Hills but when people start showing up dead she and her new friends must uncover the truth before they become the next victims.