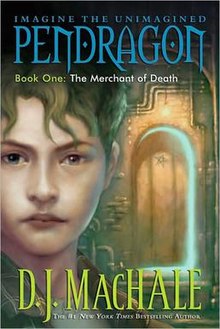 Category: Series
Tags: Action, Adventure, Family, Fantasy, Friendship, Traveler
Author: D.J. MacHale
Genre: Fantasy
Series: Pendragon
Publisher: Aladdin
Title: The Merchant of Death
Parents should be aware that there is death and evil talked about in this book. At its core the stories are about the struggle between good and evil and the boy that is supposed to "save" each world he travels to. This is an action packed adventure series great for both boys and girls 12+.

Bobby Pendragon is on the baseball team, good at school, and just kissed his crush Courtney Chetwynde. He’s pretty much like any other boy his age except that he is a Traveler, someone who can journey to other worlds. On top of this discovery, he is also destined to save the world. Yep… he wasn’t expecting that either.

Pendragon is about to head to the big championship game when his Uncle Press stops by the house unannounced, ruining his romantic moment with Courtney. He tells Bobby that he needs his help immediately. They head to an abandoned subway station where his uncle gives him strange instructions on how to get to a place called “Denduron” should they get separated. He doesn’t know how that’s possible until his uncle starts getting attacked and tells him to run. Bobby is chased by giant dogs in the subway tunnel and barely makes it through the doorway his uncle describes. After shouting “Denduron” he is flumed to another world.

Separated from his Uncle Press and in a completely new world, he must learn quickly what it means to be a Traveler. He is taught by a fellow traveler his own age that it is their job to help people free people from oppression and save the worlds from total destruction. Bobby must learn quickly how to fit in with the people of Denduron and help overthrow the dictator before he can return home. Along the way he will learn what it means to put the needs of others before himself.

Bobby also finds out that Denduron is only the first of many worlds that need help with their own revolutions and he must to decide if he is going to embrace his destiny as a traveler. The Pendragon series is 10 books in total and follows Bobby on his exciting adventures across worlds as he attempts to save them from turmoil.