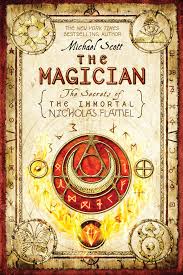 The adventure continues of the Secrets of the Immortal Nicholas Flamel. It starts with the hope of finding an old friend and student of the Alchemyst himself. In none other than Paris; Nicholas Flamel’s hometown. Sophie and Josh Newman, armed with Scatty, set out to find this man who can control and hopefully teach Sophie the element of Fire. Seeing as only Sophie’s powers were awakened, Josh is a little jealous. Then on top of that, Sophie was given a gift of unending knowledge about things she never would have known from the Witch of Endor and is now learning magic of the elements. Turns out Dee has a friend in Paris, so even though he is 8,000 miles away he is still in hot pursuit of the twins.

Niccolo Machiavelle lives in Paris and is under the employment of Dr. John Dee. Nicholas and Perenell are slowly beginning to age, and will soon come to the end of their lives if they cannot find a way to get the Book of Abraham back. Dark things are coming after the twins and the only way they are going to be able to defeat them is by working together; if they can. Has the prospect of power become too much of a conflict for the twins? Will the ancient darkness gathering finally win? Find out in the captivating adventure of The Magician.