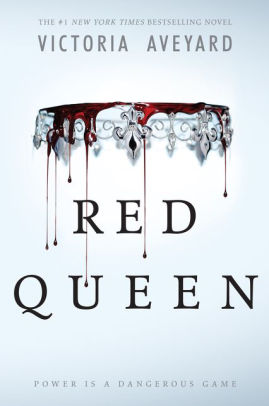 Category: Series
Tags: Deception, Dystopian, Friendship, Romance, Social Hierarchy, Supernatural
Author: Victoria Aveyard
Genre: Fantasy
Series: Red Queen
Publisher: Harper Teen
Title: Red Queen
This is a very exciting, action packed series that is a story about a girl being part of something bigger than herself. This book touches on oppression and social stratification and the battle for equality. There is death in this book and torture. I would recommend this series for young adults, readers 13+ because of the graphic scenes and young romantic relationships.

Mare is born and raised in the stilts where children of 18 that don’t have a job are conscripted into the military. Without an apprenticeship or job, Mare spends her days pickpocketing to support her family and anxiously waits for the day she will be conscripted like her brothers before her. She is a red blood, or a human, with no special abilities. Those with silver blood are gifted from birth with special powers and are treated as superiors to those with red blood.

Kilorn is Mare’s best friend and when his boss unexpectedly passes away he finds himself without a job on the brink of his 18th birthday. Mare is worried about his impending conscription and so she devises a plan to get them out of the city. Things go disastrously wrong and in an effort to make up for the trouble she’s caused her family, she tries to steal from a young man and gets caught. In a weird twist of fate, the guy let’s her go, gives her his coin, and accompanies her safely home.

Soon after she is called to the palace to work as a server for the Queenstrials, a competition for silver bloods to determine who will be wed to the prince and next in line for the throne. There, she discovers that the man who let her go was the prince and next in line for the throne. Startled Mare accidentally falls into the protective wall of electricity around the combat pit and survives, revealing that she is what no one thought was possible- a red-blood with powers. The King and Queen cannot let this knowledge get out to the public, so they arrange a plan to keep her under their noses. Mare must pose as a long lost silver blood princess, and is betrothed to the prince’s younger brother. While at the palace she must pull strings carefully to help support the red blood uprising, the Scarlet Guard, without revealing who she truly is to those around her at court. This is a fast-paced story of deception, rebellion, and survival that you will fall in love with from the beginning.