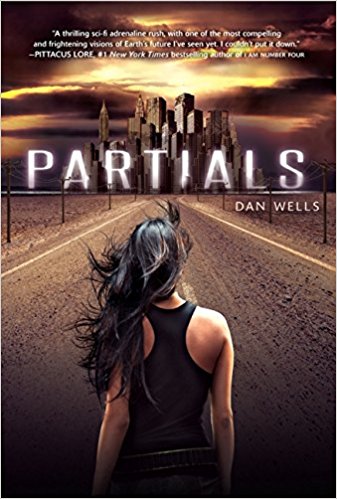 Humans made genetically engineered robots to fight a war for us and named them the Partials. After the war was won a deadly virus outbreak, generated from the Partials, left only a fraction of the human population alive and isolated from the rest of the ruined world. All except for the Partials who hide in waiting for reasons the remaining humans don’t know.Those who were immune to the virus have re-built a society focused on one thing: survival of the human race. What they weren’t expecting from the virus was the inability for a newborn to live for more than three days, and with only thousands of people left it’s only a matter of time before humans blink out of existence. Kira is a sixteen year old medical trainee who is certain the missing link for the cure is out there. Rebels called the Voice are starting to act out and are getting more support each passing day, and with the local government lowering the age of the Hope Act in retaliation, and therefor charging girls to reproduce at a younger age, time is running out. Forced to sit by and record each baby’s passing, Kira is fueled with determination and a desire to find the cure at any cost. With the help of her closest friends and the ones she didn’t know she had, Kira will find the way to save the human race. Only, will she be able to bridge the gaps between the Partials and the humans in order to save them both?