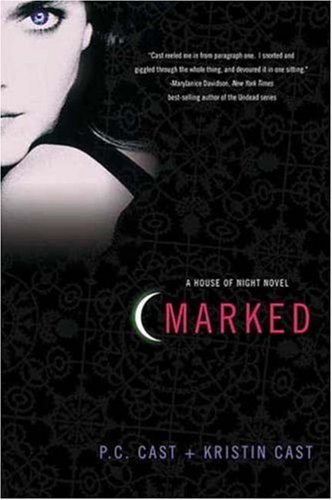 Category: Series
Tags: Bullying, Dating, Magic, Relationships, School, Spirituality, Vampires
Authors: Kristin Cast, P. C. Cast
Genres: Paranormal, Urban Fantasy
Series: House of Night
Publisher: St. Martin's Press
Title: Marked
Parents- I would caution against this for readers under the age of 13. There is a lot of mature topics in this book: peer pressure, bullying, dating, drinking, etc. Zoey is learning about her own spirituality and what it means to be yourself.

Being a vampire in a House of Night novel is as common as being a human in real life. Even though vampires exist there is still a fear that you could be the next human marked for the transformation. Zoey Redbird, a junior in high school, has just been marked; chosen to become a vampire by the goddess Nyx. This means two things for her, one, she may or may not make it through the change to become a full grown vampire. Two, she has to leave her home, friends, and family to move into the House of Night. There she will train and study for her new life as a vampire. Only things have already started off differently for Zoey. The goddess Nyx has taken a special interest in her. Leaving Zoey with valuable powers and a hard path ahead of her. When Zoey is invited to join the Dark Daughters, the schools sorority, she has no choice but to join. These sexy vampires have their way around the school. Though she was forced into attending, Zoey wants to something about the group’s cruel leader.