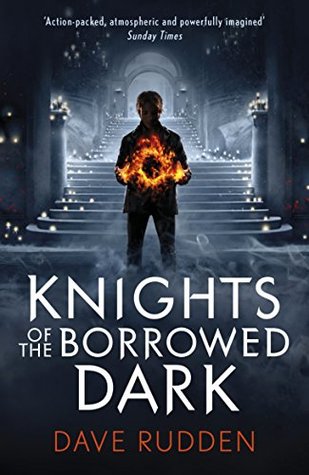 Category: Series
Tags: Darkness, Friendship, Knights, Mystery, Orphan, Supernatural
Author: Dave Rudden
Genre: Fantasy
Series: Knights of the Borrowed Dark
Publisher: Yearling
Title: Knights of the Borrowed Dark
Proceed with caution. This book, although advertised for middle-grade readers, is very dark. Within the first few pages the director of the orphanage is tortured for information wherein his collar bone is snapped with force. There is a lot of battling and the evil creatures depicted are the things of nightmares. The advanced vocabulary could also pose a challenge to many younger readers.

Crosscaper Orphanage is a bleak place to experience childhood. Denizen is lucky to have his best-friend Simon with him, since they were both brought there at a a very young age, and both share a love for books. They’ve grown up reading books of all kinds, their only escape from the walls of the orphanage. Denizen has never known anything about his parents, unlike other kids, and is shocked to get a letter from an aunt he never knew he had shortly after his 13th birthday. Denizen is invited to come stay with her and being the pessimist he is thinks it’s too good to be true.

Denizen is picked up from the orphanage by one of his aunt’s co-workers and is driven to a giant house on a row of embassy houses. The flag outside the house is from a country he has never seen before and the surprise attack on the journey there makes him realize there is more to his family than he could have ever imagined. Denizen discovers he is from a long line of Knights that are sworn to defend earth from the evil things that live in the shadows. Will Denizen decide to join the ragtag band of Knights? If he does, he will enter a dangerous dark world where one must fight for survival.