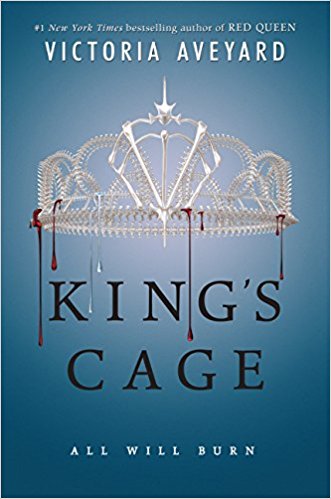 Category: Series
Tags: Action, Dystopian, Friendship, Homosexuality, Relationships, Romance, Social Hierarchy, Supernatural, War
Author: Victoria Aveyard
Genre: Fantasy
Series: Red Queen
Publisher: Harper Teen
Title: King's Cage
This is the 3rd book in the Red Queen series. Mare is being held captive at the palace under Maven's control. She goes through some torture, so I recommend this for mature readers. Maven is growing steadily mad, not knowing who to trust after his mother's meddling in his mind.  Cal and Mare finally express their love for one another and unite against the king that has brought ruin to both their lives.

Mare is being held captive by Maven, who is now the king, and is kept from using her lightening powers by silent stone manacles she must wear at all times. She finds herself walking a thin line between learning information to help the Scarlet Guard and staying alive. Under torture, silent stone, lock and key, and Maven’s ever watching eyes, Mare must stay strong and keep her spark of life alive until the others can come set her free. Maven is struggling to keep control over his own country as the Scarlet Guard get braver and silver houses turn against the young king.

The Scarlet Guard continues to gain followers and is preparing for all out war against the King. Cal is determined on freeing Mare from his brother’s custody, but he doesn’t have as much power within the Scarlet Guard as he did over his own military, and must help the cause before he can help Mare. Cameron is still learning how to control her own powers and through the process is understanding more about the lightning girl she once hated. Her primary focus is still to save her brother from the Choke, and she is relentless in her requests to the Commander to get help freeing him but with little movement, she may just take matters into her own hands.

Mare knows Maven like no one else does and could be the key to ending his reign, if she can be freed. Norta is on the brink of insurgence and the Scarlet Guard intends to rise from the ashes “Red as the Dawn”. This climatic book is the turn in the war we’ve all been waiting for.