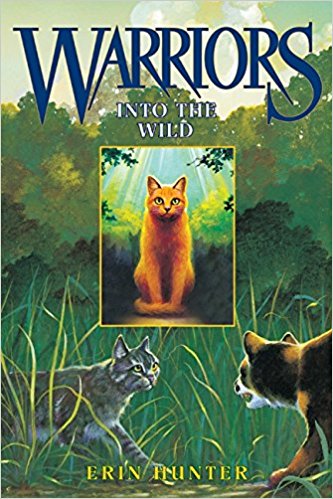 Category: Series
Tags: Action, Adventure, Cats, Friendship, Prophecy, Warriors
Author: Erin Hunter
Genre: Fantasy
Series: Warriors
Publisher: Harper Collins
Title: Into the Wild
This is an amazing series that pulls you in from the very beginning. I highly recommend this for readers 10+, or middle school readers, both boys and girls. Some younger children might find this series complicated to follow because of the rankings and separation of clans. The most interesting part about these books is that they are written from the perspective of cats. That's right, cats!

Rusty is a kitty pet who goes into the wild, the forest on the other side of his backyard fence, looking for an adventure.

There have always been four Clans in the forest. Cats who live by the rules according to Star Clan, their warrior ancestors. The Thunder Clan cats are in danger of dark power growing within their own borders. Rusty wants to join Thunder Clan, but it will mean leaving his comfortable life and entering one with responsibilities. An ancient prophecy calls for fire to save them all. Could he be the answer to their problems, or just the beginning of them?

A note to parents:

The forest is split into four clans, each protecting their own, and the books are about their lives in the forest. There is a prophecy the leaders of the clans have been waiting to come true and when one ordinary house-cat comes to the forest they believe him to be the answer.

This series is about a cat who is trying to prove that just because he wasn’t Clan born doesn’t mean he can’t still be a great Warrior. There are some battles between the four Clans, but nothing that is too graphic. Occasionally throughout the series, some cats do die. There is discrimination in Thunder Clan about Rusty, because he is an outsider, and whether or not he can train to be a warrior.  The books are cleanly written and when they talk about reproduction it is simply a fact of nature that the male cats father ‘kits’ with a female cat, and there are no specific details. They have bonds between cats that act as families would. There are mentors to apprentices that are training to become warriors to defend their borders and hunt for the clan. There is respect for the elders in the clans and the apprentices take care of them. They also have a spiritual foundation built of “Star Clan” a heaven of sorts where the cats who have died go to guide them. These ancestors occasionally appear in dreams and they are the ones responsible for granting clan leaders their nine lives.

It is very fun to read the thoughts and feelings of a cat, and it will make you change the way you look at your own pets.

The Warriors books are written in sets of 6 and they should be read in the following order:

Warriors: Omen of the Stars

Warriors: Dawn of the Clans

Warriors: A Vision of Shadows

There are additional books in the series called “Super Editions” which are stand alone books that give you a backstory to a character, or the story from another character’s perspective. These can give away things if they aren’t read in the proper order.