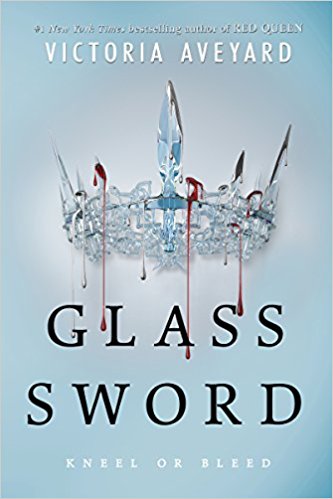 Category: Series
Tags: Action, Dystopian, Friendships, Relationships, Romance, Social Hierarchy, Supernatural
Author: Victoria Aveyard
Genre: Fantasy
Series: Red Queen
Publisher: Harper Teen
Title: Glass Sword
The sequel to Red Queen immerses you in Mare’s internal battle between what she wants, and the needs of those she cares for. The book is extremely fast-paced and action packed and will have you questioning what will happen next every step of the way. Victoria Aveyard knows how to surprise readers and create a complex story with characters that everyone will root for.

So much has happened to Mare is such a short period of time. She has been yanked from the life she knew and tossed into the royal palace life surrounded by silver bloods, taught how to control the powers within herself, betrayed by those she thought she could trust, and now she discovers she isn’t the only one of her kind. Mare has barely escaped the wickedness of Maven and Queen with her life and Cal in tow. The list of names from Julian are the biggest asset the Scarlet Guard has against the silver bloods but Maven now has access to those names too.  Mare is happy that her family is safe and glad to be free of her oppressors, but she is rightfully anxious about the names on the list and needs the help of the Scarlet Guard to save them. She must convince them to let her and Cal save the other “impossibilities” before Maven, the newly appointed King, kills or captures them. The recent betrayals and the weight of so many lives on her mind causes Mare to question who she can trust. The Scarlet Guard turns out to be a much bigger operation than she first thought and she will have to learn to navigate the ranks better than she did the politics of the castle, or the lives of the other impossibilities will be snuffed out.