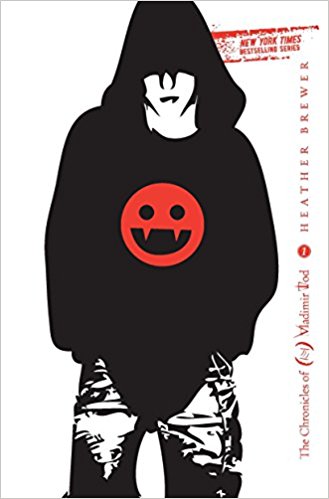 This is the first book in the chronicles of Vladimir Tod. Vlad is a thirteen year old boy in the eighth grade. He has a best friend who is named Henry. Vlad has problem with bullies and finding a date to the next dance. The only difference between him and the rest of his peers is that he was born half-vampire half-human. We learn that his parents died three years ago and that his guardian was one of his mother’s friends, who just happens to be a nurse and can supply his appetite with expired donated blood. Vlad’s life is as normal as can be until one his teachers goes missing and is replaced by a man who teaches mythology instead of English. When this teacher takes an specific interest in Vladmir and assigns him the task of writing a paper on vampires, even his classmates suspect Vlad is different. Can Vlad keep his secret and pass the eighth grade, all while trying to learn more about his parents suspicious death? Find out in the first installment in the Chronicles of Vladimir Todd.