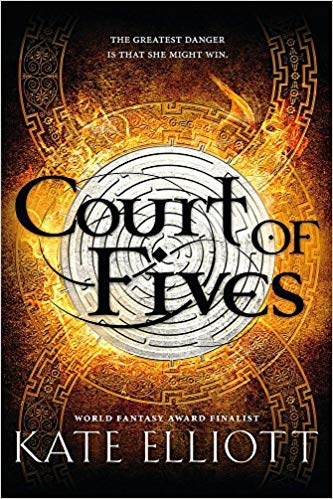 Category: Series
Tags: Action, Competition, Dating, Death, Social Hierarchy, Sports
Author: Kate Elliott
Genre: Fantasy
Series: Court of Fives
Publisher: Little Brown Books
Title: Court of Fives
Jessamy must balance her title of a Patron with her desire to compete and train for the Fives. There are some sensitive subjects in this book like religion, social stratification and racism. I would recommend this for mature readers.

Jessamy wants to compete in the Fives, an athletic competition, but her Father’s status in society makes it disgraceful for her to compete. That doesn’t stop her from training in secret and saving up to pay the entrance fee. Her Father, a Patron, is in the army and trying to rise up through the ranks to bring status to his family of Commonors. There is a Fives competition being held, in his honor for his victory on the battlefield, on the day Jessemy plans to compete. She can’t let this stop her, not with all the hard work she has put into training. She decides to compete but cannot win as the winners must reveal their identity. She comes in a close second, but the boy she lets win doesn’t look happy, like he knows she lost on purpose.

Soon after running in the Fives, Jessamy’s Father is faced with a difficult decision that will impact his family forever. When his choice leaves Jessamy’s mother and sisters in danger, it is up to her to save them from a sure death.